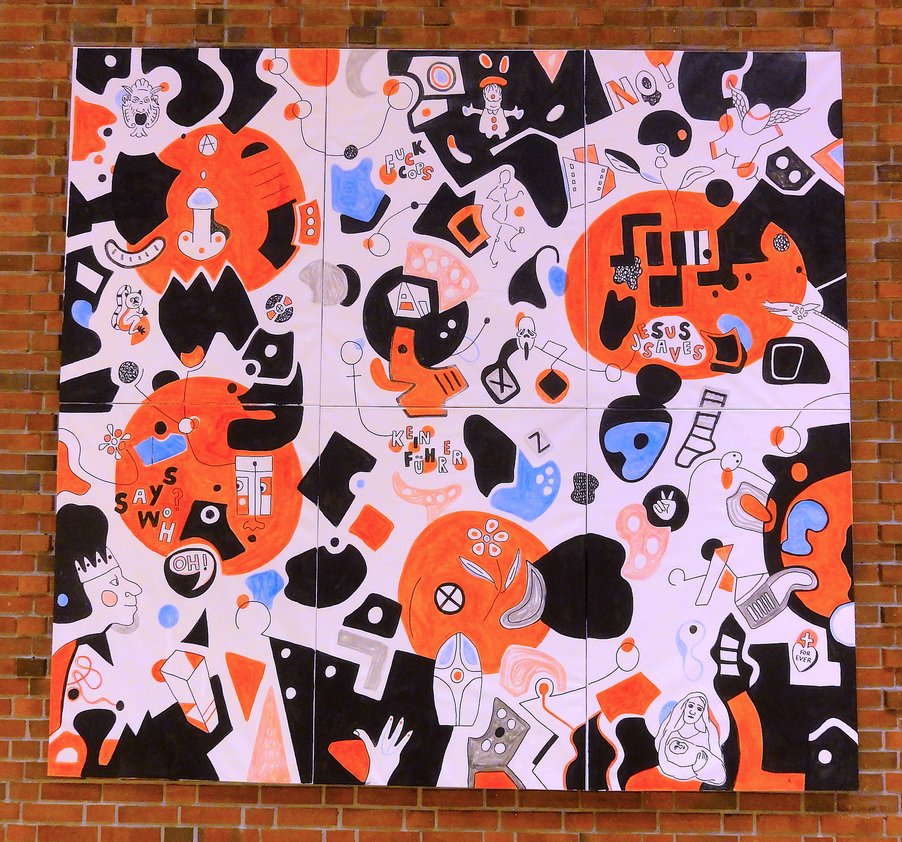 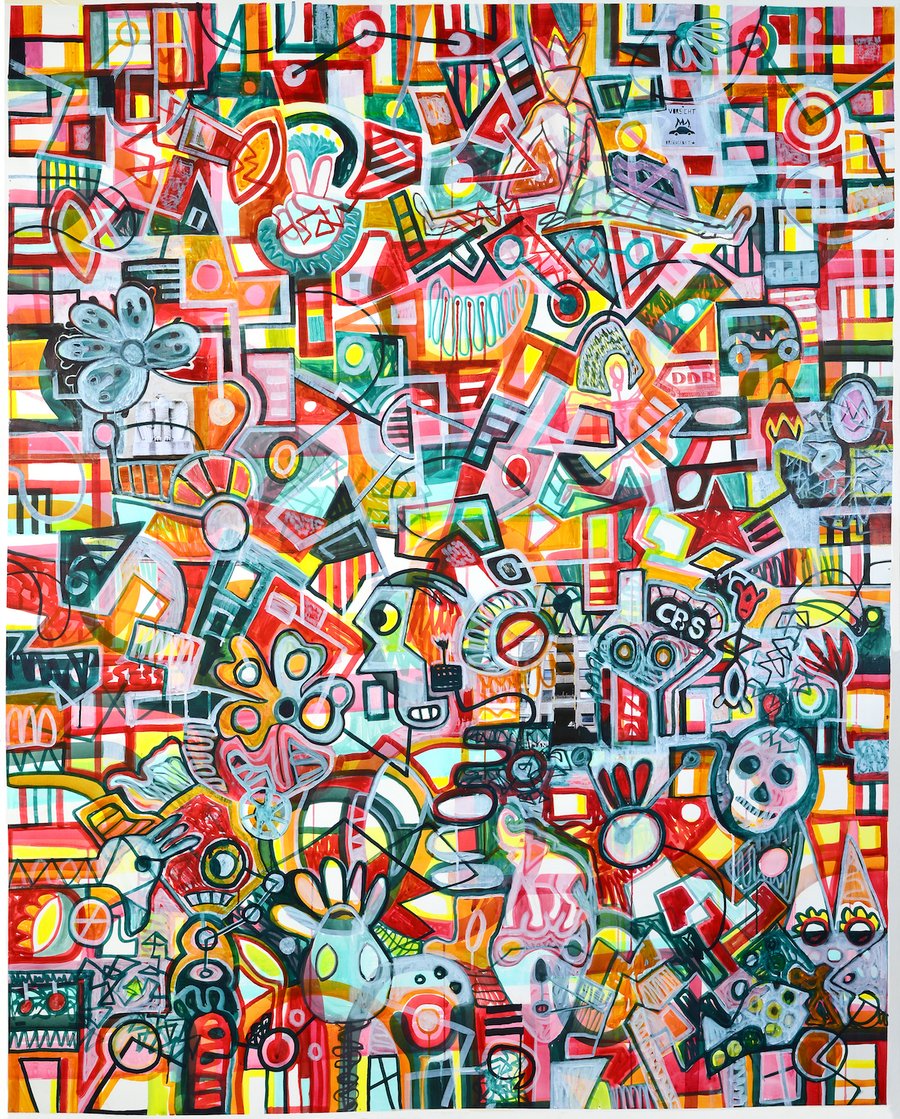 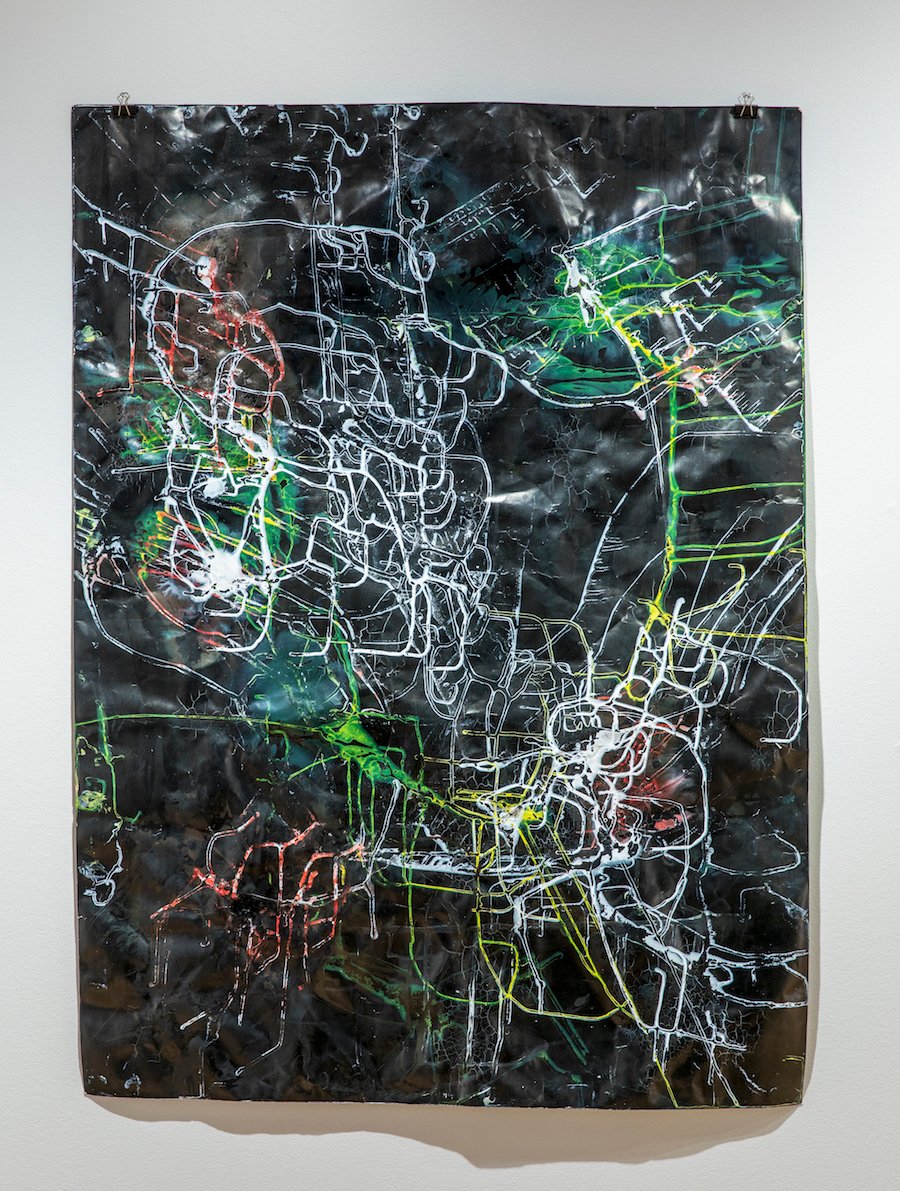 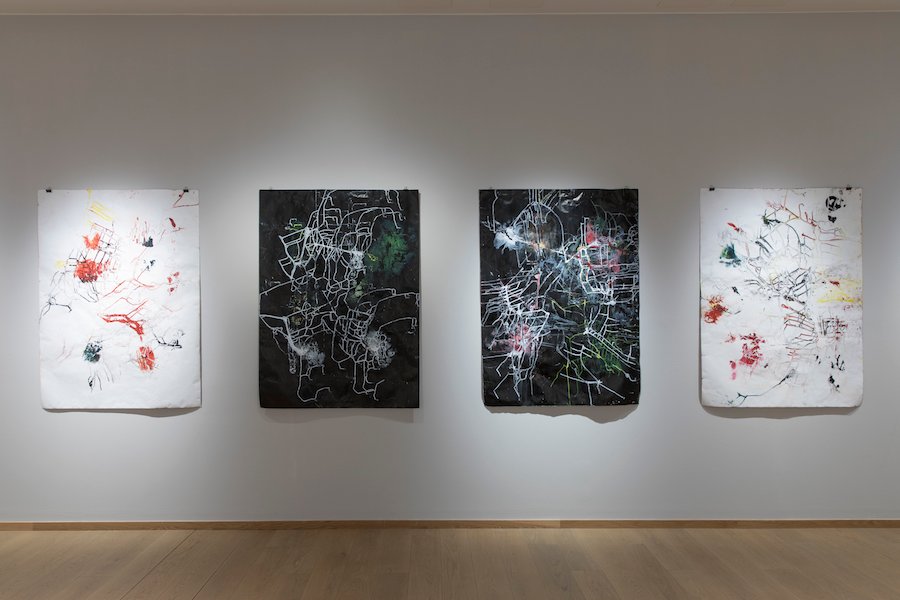 Aage Langhelle's new exhibition at Oseana could be seen as a document of an ongoing artistic process, a work-in-progress bridging the gap between photography and painting, figuration and abstraction.
Uncertain Maps is a body of work using photos of details from the urban scene as a point of departure. Here, the artist documents objects – such as birdhouses, discarded furniture, scarves hung from branches and lamp posts by protesters to commemorate victims of violent clashes, water bowls for dogs – left by Berliners on the street. The artist interprets these urban leftovers as a kind of non-verbal act of communication, articulated as miniature interventions in public space. These photographies are composed as close-ups – macrophotography – in such a way that the motifs are hardly recogniseable. These abstracted figurations are developed onto photographic paper, before the artist proceeds to paint or draw interconnected lines upon them. Thereafter, the images are subjected to harsh treatment, by washing and various chemical processes, adding a further layer of randomness and abstraction before the images are again washed, treated with heat, drawn upon again, the process repeated until the original image is transformed to the limits of recognition and beyond.
The juxtaposition (or superimposition) of photo documentation of reality and pure abstraction could be said to touch upon both the macroscopic – city planning, infrastructure, satellite imagery – and microscopic – traces, remnants, of individual existence. Taking his practice one step further into the realms of pure abstraction through the series Uncertain Traces — Comments on Mapping in- between Order and Randomness, the photographic is abandoned altogether (the only remnant being the actual photo paper), thereby distilling the creative process down to the purely material and abstract, emphasizing qualities pertaining to artistic control versus tumultuous physical conditions, giving rise to a unique colour spectrum as well as cracks and bulges in the paper – a topography arising from the artistic process, guiding the flow of rivers of ink. By removing the photographic references (even though they were never easily recognizable in the first place, obscured by layers of cracks and ink), Langhelle shifts his focus to these layers of material interactions, possible interpretations and ways of perception.
A brand-new series shown at Oseana, Layers of space 2017, returns to the semi- familiar and recognisable, based upon snapshots taken from garbage bins in public space in Berlin. These photographic compositions could be seen as a document of temporary, unseen visual collaborations between city dwellers, completely uncontrolled by the artist, who puts his hand, holding a compact camera, into Berlin's yellow trash cans, takes a picture of what's contained within and returns to his studio to print the images. Again, a wibbly-wobbly grid of interlacing lines is created, using inks, washing and heat. In contrast to his recent series of watercolours (titled after their predominant colour) where rigid rasters of horizontal and vertical lines are painted, then washed, smudged and blurred, these seemingly arbitrary entanglements manifest as a subjective cartography – the artist's contribution to ordinarily unseen, unconscious compositional collaborations of urban coexistence.
Referencing the top-down perspective, depictions of our planet from above, Langhelle's art brings to mind the early abstractions of Kazimir Malevich's proto- colour field paintings, one example being Suprematist Composition: Airplane Flying (1915) – a far more fitting reference for these tangled networks than the apparent visual similarity to Jackson Pollock’s dripster painting. Langhelle’s images could, akin to Wassily Kandinsky’s non-representational painting, be thought of as intermediaries between the inner and outer world: the inner explored from the outer, and vice versa.
An element of contemplation lies at the core of Langhelle's practice. The artist enters a sort of meditative state, an intuitive, next to non-thinking flow, while working on his pictures. The resulting patterns – requiring intensive work, editing and repetition – bring to mind both Google maps and satellite imagery (the macrocosm) and neural networks (maps of inner space, the microcosm). These intertwined lines often seem to be frozen in the midst of a choreographed set of movements where the rhythm is fluent, but simultaneously tight: As the artist himself puts it, “it has to swing”. But the patterns are in no way calculated – they arise, organically, arbitrarily and fluently, like synaptic connections of the brain or asphalt in-between and around housing blocks. The artist “dances in chains”, as Nietzsche wrote about the abundant inspiration offered to the old poets by the imposition of constraints in the creative process.
The subtitle Comments on Mapping in-between Order and Randomness seems to provide a key to the decryption of what is presented in the gallery. The ancient Chinese sages created the I Ching – a system of divination involving the throwing of sticks and a subsequent interpretation of the incidental result – because they believed that random events, due to the fact that they are devoid of apparent, instant, inherent meaning, may reveal deeper truths.