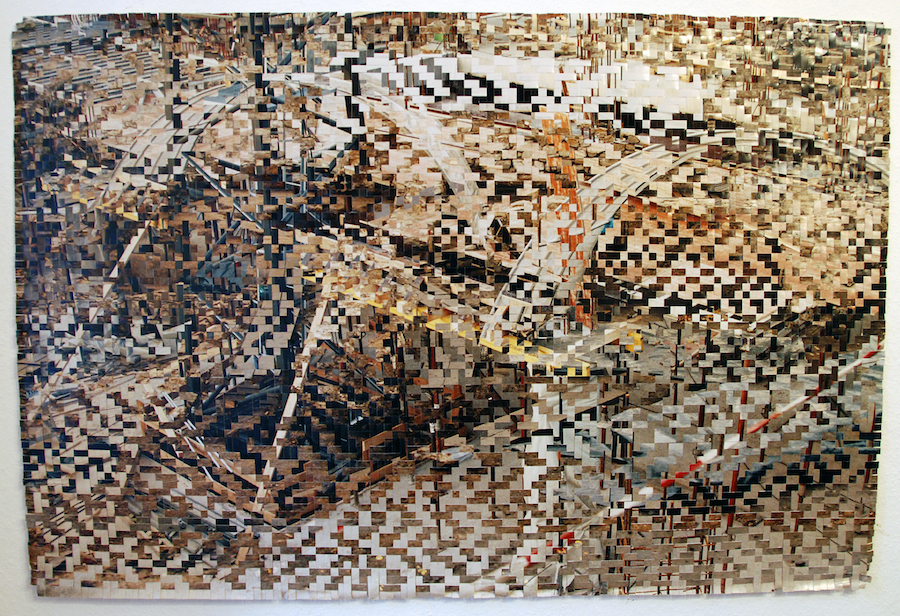 Order and unease
In the renaissance, a grid was used as an aid for accurately replicating a motif. The artist looked through a grid to help him measure precisely the distance between different points in a picture. Aage Langhelle's most orderly woven pictures demonstrate a similar rigidity; even so, they deviate from it in that not one, but two motifs are chopped into squares, blended together and are thereby fragmented. The grid serves the purpose of spreading the photographic motif over the surface as well as acting as a starting point for disrupting the photograph's referentiality. In this process there is room for both rigid adherence to structure (weaving without sidestepping) and for playing imaginative games with the weaving technique. Langhelle does not approach the photographic material with deference, but rather uses it as a starting point for experimenting with visual perception, and in the extention of this, for contemplation of the photograph as a medium.

The woven pictures are made up of photographs cut up into strips then woven together. Two motifs can be interwoven quite mechanically: one up, one down until both pictures are filtered into each other in a regular pattern across the whole surface. The cutout windows that emerge of the individual motif lie flickering on the borderline between the referential and the concrete/abstract - the eye searches for a motif, but the grainy disruption of the motif into squares hampers the unproblematic connection to a reference. The two motifs compete for attention. One can decide to see the one, or the other. A portrait, for instance, or a building site.

In other pictures Langhelle departs from a systematic approach in favour of a more random order. Playing with the ornamental takes the upper hand, and the motifs are broken up into strips and squares. In contrast to the more mechanically woven pictures, it seems here that aesthetic considerations have played a part as the weaving proceeds, as if to achieve particular visual effects. A moulding force, individual elements become visible when specific patterns emerge, rythm and decoration seem to have been consciously shaped. The effect of depth in the ornamentation, the repetitions of colour and a certain way of doing it - a knack - are more reminiscent of manual weaving techniques rather than the grid as a visual measuring tool.

The visual confusion that is brought about by the pictures is similar to what happens when we think about an incident that took place some time back. The intensity, the need to remember exactly what happened, makes the memory fade. The details slip out of our grasp. In the end we don't know whether what we remember really happened, or whether we made it up. The very act of recall adds so many alterations to the incident that it is hardly the same event any longer. Our impression of the past cannot escape being affected by a moulding force, trying to fit the incidents into certain structures. The image we recall is both detracted from and added to in the process of recollection.

Langhelle unites two extremes when he transforms the photographs into an interwoven grid pattern, a sectioning that stands in contrast to everything a photograph is considered to be. According to Rosalind Krauss the grid mesh is non-narrative: it acts as a self-sufficient, aesthetic set of rules and relates only to itself. The photograph, on the other hand, is by definition referential, in that it always incorporates traces of what was in front of the lens at the moment of exposure. It invites us to engage in just the kind of thought processes that the grid does not encourage. Both narrative and metaphor, sequential study and the referential, are set in motion. In the interwoven pictures there is in a kind of way a crossover of these two opposites: of the grid mesh as autonymous and non-referential, and the photograph as narrative and referential. The mesh begins to refer to itself as a shaping force, and the photograph disintegrates as a reference.

A photograph is always an image of the past; the moment of exposure is back in time, and looking at a photograph therefore always means looking at a bygone visual impression. When the photographic image here is exposed to various structural forces, it no longer has an external reference, it refers just as much to itself as an aesthetic or material object. One picture overlaps or is combined with another; it is subjected to manipulation and alteration. By working with it the motif disintegrates as an object, it is not presented as anything which seems to be whole or real.

A similar combination and transgression of opposites in one and the same picture can be seen in a series of photographs of plants. Here the systematic approach is already in place as the picture of the motif is taken: the plants are set in the ground in some kind of system; the theme is groups of plants in gardens and flower beds at different spots in the city. The similarity with the interwoven pictures can be found in that here, too, there is a certain order that has been imposed on something that already exists - in this case not on a motif, but on an organism. And again it is up to the observer to choose his focus - to see the system, or deviation from the system. Movement is created between the systematic and the individual motif/organism.

The distinction between what is a system and what is the difference from order, is not always easy to determine. The plants themselves are cultivated, and they adhere just as much to their inherent predetermined plan as to the planting grid imposed upon them. We are dealing here with structures on several levels and of varying sizes that mutually comment on and compete with one another.

The woven pictures can be perceived as playing games with and contemplation of the grid meshs potential - visually in the way the pictures combine, are distorted and interact. Games are also played with the three-dimensional modelling. The expression changes from a woven surface to a woven tube or folded pleat. The pictures assume the nature of an object, they become three-dimensional objects, things. At exhibitions they are often displayed in a group: woven pictures rest on a shelf, not fixed to the wall, and other objects are often displayed alongside them. There are objects with a thematic hint, such as cowboy romanticism, boyish dreams, horses, a touch of homosexuality - eroticism. There may be personal objects like a dressing gown, a clothes brush, pictures of body parts. The woven pictures are lifted out of a purely introverted artistic discourse (referentiality versus grid mesh) into a more private, autbiographical or personally related story. Focus dissolves and is scattered into the fragmentary, associative.

A similar fragmentation can be experienced when constantly changing the angle of approach, the work method, and migration between forms of presentation, which Langhelle insists upon both while work is in progress and when exhibiting the completed works. The most systematic, finely meshed photographs in particular could be perfectly suited to a monumental staging; they incorporate both a strict order that emits authority, and they limit themselves to a narrowly defined technical area. But instead of holding on to this, they pull away. The pictures are likely to be casually displayed on a shelf, the hand-weaving is too irregular to meet minimalistic requirements, and the number of pieces moves the centre of gravity from one work to an associative series, to transfers and constant testing. One idea generates the next, and instead of marking out an area that is Langhelle by signature, the scene is always in flux. Rather than settling in one place, the pictures indicate ways to move forward.

As an anti-monumental work, or work in progress, the pieces can both irritate and fascinate. Irritate because they don't fulfil the need for open-and shut answers, they don't provide an indisputable truth; fascinate because they always allow for another possibility, a new connection. Simple opposites are succeeded by multiple potential correlations.

Ingvill Henmo is an art critic and former editor of the Norwegian art journal Billedkunst. She is educated as an artist and literary critic.